On the 15th November 2016 a special seminar Dante in Europe in 2016 … towards 2021 was held at the Latimer Room in Clare College in Italian and English and was attended by over 40 people, including many students of our Cultural Centre and representatives of the Cambridge University Italian Society. Dott.ssa Giulia Portuese-Williams, our director and founder spoke about the role of our Cultural Association as part of the Dante Alighieri Society which actively promotes Italian language and culture in Cambridge and the UK. This important event had high visibility: on our social media pages, a radio show entirely devoted to the seminar on Radio Dante with Euridice Comuzzi and Alessandra Icardi. You can listen to the podcast on www.cambridge105.fm  and watch an interview during Business Focus on Cambridge TV with journalist Alina Trabattoni.

The Roman writer Raffaela Cavalieri  presented one of her publications ‘Italy through Dante’s eyes: Traveller’s Guide’. She gave an interesting account of the journey Dante had during his exile with detailed maps, enriched by images and interesting stories like Paolo and Francesca at the Gradara Castle, the journey of exile endured by Dante one he was exiled from Florence due to the war between Guelfi and Ghibellini. A journey that goes from Florence to Ravenna where the poet’s bones rest in a tiny church next to a monastery.

Dott.ssa Anna Bonazza, from Ravenna Festival, presented the prestigious Ravenna’s Festival programme, with a rich array of performances held during May and July 2017.

‘Young Artists for Dante’ appeals to a new generation of artists and lovers of Dante (the majority of the members of the group must be under 30) to create shows which are no longer than 40 minutes . The selected proposals will run every day at 11 am, from May 25 to July 2, at the Franciscan Cloisters.

Dubois, director of the Centre Choréographique National de Roubaix / Ballet du Nord, is back with Les mémoires d’un seigneur (Palazzo De André, June 8). Thanks to the meeting on the stage between a dancer (Dubois’s favourite Sébastien Perrault) and 40 amateurs selected through a workshop, this work explores the notions of power and temptation, turning into a Caravaggesque portrait of inferno. An entire civilisation is reflected in Dubois’s seigneur and explored through the protagonist’s solitude as well as through the ever-shifting mass of bodies – which are the very raw material and ‘living scene’ of the choreography – the same way Dante’s journey is human and universal. Almost an epic of the solitude which develops between struggles and triumphs through three epochs (The Glory, The Fall, The Farewell) the three-part tale of Les Mémoires acts as a prologue to a project dedicated to the Commedia that will accompany the Festival toward 2021 with Dubois’s contribution.

The second part of the seminar was about the Parchi letterari, with a special focus on Le Terre di Dante. Mr Moroni presented the various itineraries the tourists can visit with an accurate description of the beautiful landscapes in Tuscany and Emilia Romagna through audio-visual images, songs and stories. The seminar concluded with the viewing of the silent monochrome film Inferno (1911).

The successful event was thanks to the partnership with the Cambridge University Italian Society  and in particular with the help of their Vice-President Michelangelo Chini and the Ravenna Festival. La Dante in Cambridge thanks Attilio Moroni for his promotion of I Parchi Letterari –Le Terre di Dante and La Società Dante Alighieri for their wonderful efforts in promoting Italian culture abroad.

Video about the seminar: https://youtu.be/9oGdK6Vd7LE 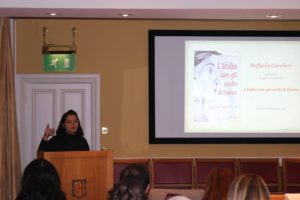 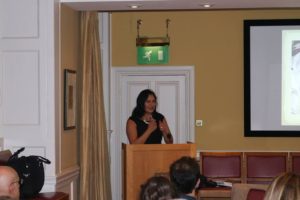 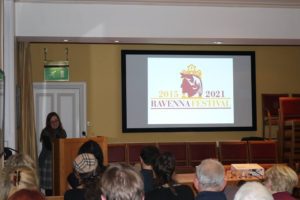 Thinking in a Foreign Language: How to Do It and Why